As a traveler, tour leader, teacher and visual artist, I have always found my art to be inspired by my travels, and my travels inspired by art. 10 years ago when I was completing my Master’s Degree, I spent numerous 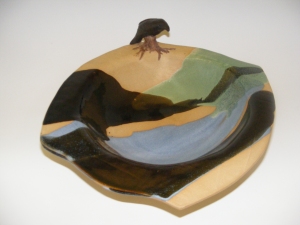 semesters in Ireland and Scotland, visiting hidden places and fairy glens with local guides, and absorbing the rich artwork, symbolism and beauty of Irish art through the ages. I would often come back to Wisconsin, and in my studio find ways to explore the imagery and experiences through sculpture, drawing, fiber art and mixed media.

For example, the raven is a symbol of many things in Celtic tales, and a powerful one at that. Shape shifter, messenger, Morrigan- all of the stories and connections of the bird played with my imagination, and led to many series of artwork like the example here in clay and fiber.

I love combining realism with fantasy or magical landscape, and often incorporate birds, as I see them as messengers and symbols of freedom through flight. the magical qualities of ravens have been noted in stories in cultures around the world. I have created many ceramic sculptures using this symbol to explore the ideas I have read about.

As I began to lead tours, especially those with an emphasis on hands-on art making, I realized that this is the perfect combination of activities, and I am passionate about sharing all that I have learned and experienced (including those hidden places!) with people. Translating the travel experience into art while on the tours is an experience that truly changes us and I hope to share this with you in the upcoming tours. 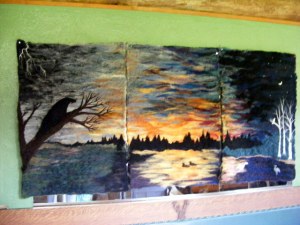 I have led several trips to Orkney, at the very north tip of Scotland, where amazing archaeological and World Heritage Sites exist. I am sharing this article about recent finds there at the Ness of Brodgar. We are hoping to plan another trip there in the future, so keep checking on developments on our website if you are interested!

The baby in Structure One

We have rather sombre news today. Five thousand years ago, a tiny child, who died, at or near, birth, was buried in Structure One. The discovery was made by Andy Boyar, an experienced excavator and one of our Masters students, who was digging at the south end of the building.

The fragile skeleton was lying on its side in a flexed position and it is enormous credit to Andy that she recognised the tiny bones and then excavated them with exquisite care.

As is required by Scots Law, the police were called to examine the scene and the bones were then removed for safe keeping.

They have been gently cleaned and laid out to see how much of the skeleton has survived.

The preservation of the bones is remarkable.

Even with adult skeletons on archaeological sites it is very easy to miss the small bones of the hands and feet.

In this case, we have many of these bones and have recovered a substantial proportion of the skeleton.

In addition to Andy’s sterling work, we were fortunate to have Natasha Powers on site.

Natasha digs at the Ness, but is also an experienced osteologist with the Museum of London and her advice was invaluable to Andy.

The bones will be examined for any more information which can be recovered and we can assure all those who are concerned by such things that they will be treated with the utmost respect and dignity.

The discovery is most unusual as the remains of children are under-represented in the archaeological record.

Some have been recorded at sites in Orkney, such as Quanterness, the Tomb of the Eagles and Banks, but if children were fully represented in the record, we would have expected many more of them to be present.

It is possible that the high infant mortality rate, thousands of years ago, may have led them not to be recognised as fully “human” until they had reached what might be described as a survivable age.

In that respect, the careful burial of this neonatal child, in an important building at the Ness, hints at a care and concern which may be greater than the normal.

We should also note that it is often difficult for diggers to deal with the remains of children and Andy will testify that Nick and structure supervisor, Dan, took particular care to ensure that she was comfortable with, and accepting of, the task.

It is interesting to note that although other human bone has been discovered at the Ness, these have all been isolated fragments, apart from one other child burial, recovered, from Trench J, in 2007.

Meanwhile, over in Structure Twelve, supervisor Jim and Nick have been discussing the latest thinking on the floor levels within the building.

The floor is uneven, but it now seems clear that the thick yellow clay is from Phase Two and not Phase One, as feared earlier.

What this means is that there is likely to be at least 20cm of Phase Two floor still in Structure Twelve.

All of this will take considerable time and effort to record, sample and remove before the upper layer of Phase One is even reached.

What are you planning to do for the next ten years, Jim?

We have more news of two earlier finds.

Mark’s macehead, which we originally thought might be bone, turned out to be made of aeolianite — a sort of compressed blown sand formation.

This explains why the artefact, while appearing, under a microscope, to be stone, was actually extremely light and formed of this material, which is found in several ancient deposits across Orkney.

We’re not sure if we can describe this as unique, but we cannot recall any other examples anywhere else.

Yesterday, we told you that Georgie had found a crushed, decorated pot, near to where the very fine incised stone was recovered last week.

Now the pot is out of the ground, we can see that it is, indeed, badly crushed, while remaining embedded in, and on, a large lump of midden.

Despite that, we can identify extremely fine, and beautifully executed, decoration incised into the body of what could be the finest vessel we have seen at the Ness.

The walls of the pot may be no thicker than three millimetres, which is remarkable for a Neolithic Grooved Ware vessel.

The task now is to let the midden and pot dry before trying to separate them.

This will undoubtedly result in more fragmentation of the vessel, but we should be able to bring the pieces together and to understand more fully what this potentially important vessel represents.

Today, we were visited by Paul Nicholson, a photographer from the Borders, who is on holiday in Orkney.

Paul brought with him his 360-degree camera and took photographs, which will represent yet another method of recording the site.

In that respect, Mark carried out yet more laser recording of the site today and hopes to complete that task tomorrow . . . when we will see you all once more.

Thanks to http://www.orkneyjar.com/ for sharing this!